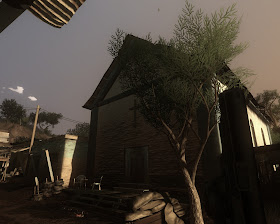 Death in games is often very… temporary. I want to find out what happens to me as a player if I make my videogame death much more permanent. This is the story of one game of Far Cry 2 – one single narrative that one way or the other will end in my death. Whether it is at the hands of my enemies, the harsh environment, or my own ineptitude, I am not going to survive the telling of this tale.

The rules: Normal difficulty; fortunes DLC installed. When I die, that’s it. Game over.

Let’s see how far Qurbani Singh can get.

I used the introductory car ride to adjust my visual settings; I figure that if I’m going to be fighting for my life I probably want the best frame rate I can get. I take everything down a notch, and while I normally play with most settings on “Very High” I take them down to just “High”. I also change from 2x to 4x anti-aliasing – if Charlie’s going to be crouching in the jungle waiting for me, I want as 'accurate' a picture of him as I can get. My life is depending on this now.

The taxi ride ends and I come down with malaria. I black out… and wake up in the room where the Jackal tells me about some Neitchze he read and nearly chops my head off. I black out again. So far, it’s all scripted cut scene.

I wake up again to the sound of gunfire and one wall of my room explodes – hit by a scripted RPG. At least I’m playing the game now and from here on in the risk of dying increases greatly. 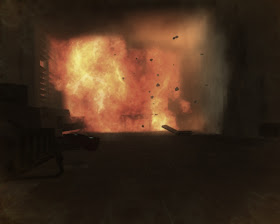 I get up out of the bed, picking up the sidearm and machete that the Jackal left. I scrabble out of the room and make my way to the central stairwell. From previous experience, I know I don’t want to go out the front door as it’s obvious that would lead me right into where the fighting is worst. Instead I cross to another room, scooping up a dropped machine gun on the way. Anything is better than this pop-gun of a sidearm, I’ve got to be able to defend myself now and a pistol just isn’t going to cut it.

I find the open window and leap out of it – no one is in sight (it is normal difficulty, after all) but as I creep down the back alley I spy some soldiers down a side-street. I turn the other direction and sprint up the hill away from town. I get as far from town as I can before I have to stop sprinting, my breathing getting ragged and my vision blurring. The malaria virus clouds the edges of the screen as I stumble across a bridge out of town. In one of the last scripted sequences before I reach the main game, I collapse onto the wooden decking of the bridge. As my vision goes dim, I hear a jeep pulling up and men jumping out of it. I slip into unconsciousness. 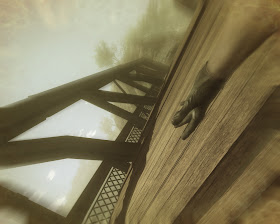 Let me take a second here to mention that, up until now it has all been very scripted. Very safe. No matter what you choose to do in the town to try and get out you end up blacking out and being picked up. Even if you get shot, you black out and get picked up. I have a feeling that where you are when you go down affects which faction you get ‘rescued’ by since every time I've gone down on that bridge I get stuck with the following guy… 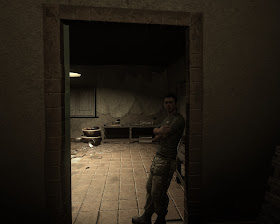 When I awoke, I’m greeted by this friendly looking guy who is slouched across the doorway. The shady looking fellow goes by the name of Joakim Carbonell and he works for the UFLL.

Carbonell tells me to fix my wounds, get some guns and go out and repair a car that’s letting off steam outside. Apparently I’m indebted to him because he saved my life and got some of his soldiers killed back in town. He’s got some monkey work for me to do and I'm happy to oblige, since he also promises to introduce me to Gakumba, the regional boss of the UFLL, if I do this work for him. Gotta start somewhere.

Fixed up the car; Carbonell can’t be bothered coming outside of his hut even thought I'm standing right outside so he calls me on the phone instead. Tells me about an enemy safe-house that he’d like to see get roughed up. I take my guns and my new car and head on up. They don’t really pose much of a threat and Carbonell calls me back when I’m done. 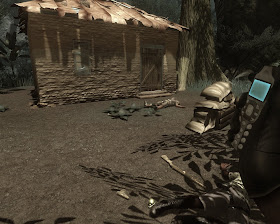 For this fight I was for the first time faced with the possibility of dying, as I had no buddy to rescue me had I stuffed up and gotten myself killed. There was a little bit of tension, but it was still incredibly easy seeing as it is on the normal difficulty. After playing on 'Infamous' (the absolute hardest difficulty) for so long I think the temptation might be for me to not take it seriously enough, which is kind of good and dangerous. I imagine that it shares a kind of verisimilitude with real war, of which there is the saying that it is “long stretches of boredom punctuated by brief moments of sheer terror”. It means that I’ll have to work to maintain concentration and focus.

Carbonell didn’t want me to fall asleep on my feet, so he told me to go inside and rest. I decided to sleep till the early evening. It had been a long day, after all. I awoke at 8pm and stepped outside to answer a phone call. Carbonell wanted me to go up to some lumber camp just up the road. I got there and scout around a bit. Apparently there was someone being held captive in one of the buildings and I was to go and rescue them. 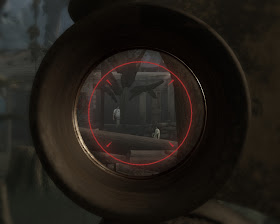 I snuck up nice and close and easily pulled off a headshot on the first of two soldiers in my sights. They were unsuspecting and went down fast. One of their number, however, managed to get a flare off before I dispatched him; no one came to help him though. When it was clear, I entered the building and freed a woman held captive named Michelle who was to become my best buddy. Knowing the kind of things I'm going to do in this game, and the kinds of tactics I'm going employ to make absolutely sure I stay alive, who would want to be my buddy? They must be pretty messed up themselves... 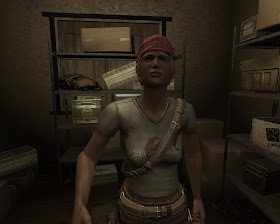 I drove back up to ‘Fresh Fish’ where Carbonell gave me my reward in diamonds, if I could find them stashed somewhere in the camp. And find them I did, since I’d already done this about 4 or 5 times when I'd played the game before. At least the later missions will be a bit more interesting as I can start to explore the freedom the geography of the world affords.

I headed on down to Mike’s bar and the gun shop next door to buy myself a new gun, or more accurately an unlimited supply of one particular gun. I also bought an accuracy upgrade for it which I hope will help me save ammo and stay alive better. By being able to bring down enemies quicker I’ll stop them from being able to bring me down. It’s this kind of strategic thinking that I’m going to need to do to make sure I never, ever lose the upper hand in this game of Far Cry 2.

Inside Mike’s bar I met up with Michelle as well as Warren Clyde who will one day provide me with a second chance if I get almost-dead. Hopefully I won’t ever need him, but I honestly don't want to risk it. You never know what dumb things might happen. I could fall off a cliff – it’s happened before – and I’d be mighty glad to have my ‘get out of death free’ card handy. I also met Reuben who will be of next to no use to me in this game, as I’m just trying to stay alive and, frankly, he’s got nothing to offer me. Michelle kinda creeps me out by mentioning something about knowing what the "price of a child" is in the country. Was she encouraging me to paedophillia?! Creepy lady is creepy. If I didn't really, really not want to lose my backup rescue buddy I'd totally find a way to kill off Michelle. I seem to recall CLINT HOCKING mentioning that eventually she annoyed him enough to provoke him to murder. 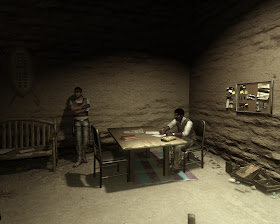 On my way back up to Pala (the town where the fighting broke out and the place that I can get malaria medicine and missions from) I break into a shack and recover some diamonds. In town I visit the church and the priest gives me some medicine in exchange for delivering a tape that Reuben gave me. Malaria can pop up at any time, so I’ll need to stay stocked up on pills. The last thing I want is to be on my last legs and then have a malaria attack render me defenceless. Something like that could get me killed very quickly. 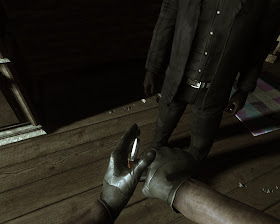 As I stepped outside the church, a dialogue told me that I’d finished the tutorial. The gloves are off. I felt very much on my own, but at least I now have my rescue buddy ready. I walked on over to the headquarters of the UFLL, the guard patting me down for concealed weapons before admitting me in to see Gakumba. I stepped inside the dimly lit building, ready for danger. 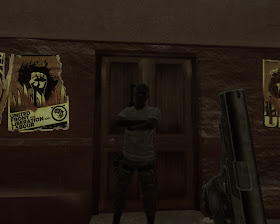 Well that took far longer than expected. At least I’m onto the meat of the game, and I 'm exposed to death proper now. I could die at any moment! The danger! The excitement! The Permanent Death! This is what it's all about folks.

One part of the motivation for this project was Manveer Heir’s talk on ‘Designing Ethical Dilemmas’ and the back-and-forth between him and Clint Hocking. It was suggested by someone that having decisions be irreversible would add weight to our in-game actions. I’m only at the start of this journey, but I’m beginning to see how that could potentially be both true and false, depending on the circumstances. If I get killed in the second episode, and that’s permanent, I’m not really going to be mourning my own death - I'll probably just write this experiment off as a bit of a failure. I’m more likely to just be annoyed at not having gotten anywhere. If, however, I get myself killed at one of the many points later in the game where you don't have a rescue buddy, I can certainly imagine being consumed with rage at the unfairness of the premature ending – which itself somewhat mirrors feelings and reactions to death in the real world.

So even if I die tomorrow (and in the game!) I’ll still have gotten some new insight into games that I feel makes it worthwhile. Here’s to hoping that trend continues.